Below is the show called BACKWASH witch is an original crackle.com internet series released by Sony staring Michael Ian Black and Sarah Silverman. I was the inker and color fella, so I actually didn’t draw the characters, I just worked on the production line. However, my name still made the credits. Check out the link below or go to crackle.com and watch backwash season one episode 13.

From Crackle: The Beginning of the End

Its pretty trippy and weird.

Summer of 2010 I spent in Chicago again uniting with sonic sorcerers to form the well unknown I KLATUS. Here is the newest song we wrote together being performed live at the Abbey pub in August. Song title “Portals Under the Lake”

Here is another one of I Klatus playing “John of the Network” at the Empty bottle in Chicago in July.

We finished our new record, and it is now being mastered. 12 songs of great magnitude. We are looking for a label to join with in unleashing upon the earth. Sample the studio track “Antedeluvian Knowledge” with our fallen friend Tariq Ali on bass.

This is the last song Tariq ever recorded I have been making noise with I Klatus for ten years now. Listen to some of the earliest recordings with this free mp3 I Klatus “Ramble” from 2001. You can check out our 2008 full length release at i tunes or Abyss Records

Scroll down to see about getting your own FREE STICKERS!

A starchild no doubt

They believed the sacrifice was needed to appease the demons, a necessary tax in their view. There is no light without darkness and no darkness with out light. They exist together like the air.

Speaking of the air, I now have BAPHOMET stickers for you! Send a S.A.S.E. to
Tom Denney
974 E Figueroa Terr. Apt 4.
Los Angeles, Ca. 90012
I will fill it with fun stuff and send it back promptly
FREE STICKERS FOR YOU!

I have been working allot it seems, can’t get it all done fast enough.
Here are is a piece I am working on for NYMPHOTOMY

Did you know there is an updated version of my book? Tom Denney Illustration Vol1 edition 2. Now with 90 full color pages, it has allot to look at and every page is glossy and can be made into a wall hanging or gift for a friend. Help support by ordering here.
http://www.lulu.com/product/paperback/tom-denney-illustration
I am also working on my second book which will have less pages but be much cheaper with only the newest images.

Lots of stuff in the works. Here is a video I just did for my solo music project CYPHLON
Follow the link to watch

http://www.youtube.com/watch?v=QAGMDIMi45U
CYPHLON-“BUESWIFF”
Finished the layout for UNFALLEN-“Paranoia Epidemic”
You can see the art in my portfolio page 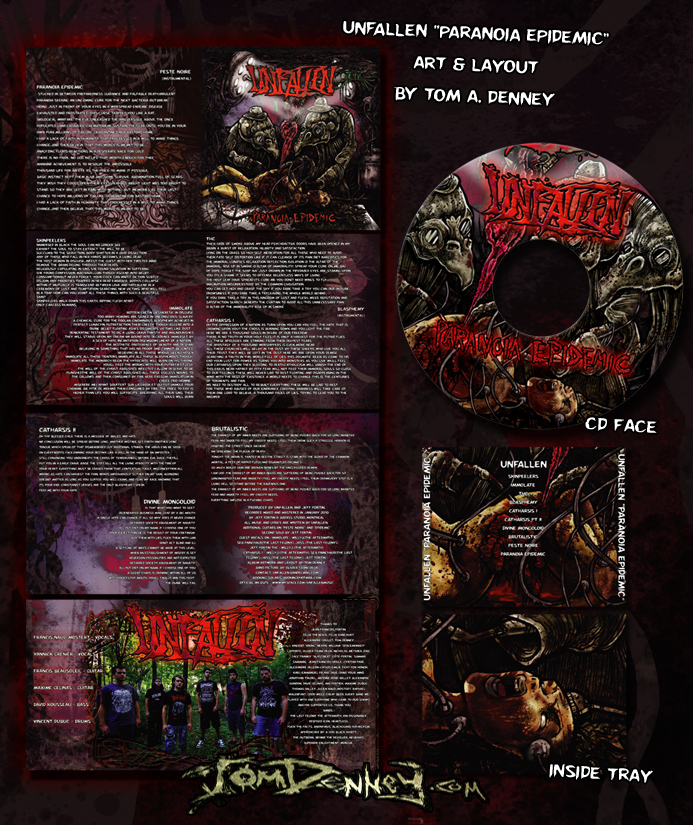 I JUST saw a bunch of indy short films at Shockfest last night that had 30thousand dollar budgets and kinda sucked story wise, so it reminded me of MY short film which had a budget of $12 but was very successful…this is a HORRIBLE MOVIE mind you but it has a very important moral lesson at the end. It is the story of a vietnam vet being interviewed by a college thesis researcher and the connection they build with eachother…
I present “EDIBLE EXCRIMENT”

Yes! Here is something I just did!

As you may or may not know I JUST moved back to LA after being in CHICAGO for the summer with I KLATUS! We finished our new record and performed a series of shows. I will have more video of that posted latter. As I am somewhat still in transit, staying at odd places, access to editing time has been limited to say the least. I do have something from one of our studio sessions.
Please view it HERE
Needless to say I have still kept very busy and should make better attempts to update this website with things like this baphomet/heirophant

And yes all of these images are sold! Tune in Next time when I will have more I KLATUS video and noise.

Yes here is some new Cephalic Carnage art. It refers to a parasitic spore taking over the body of a siamese twin type person and causing massive bodily damage

This one is an album cover for UNFALLEN

This image is for MYTHIC APPAREL…
AVAILABLE SOON NEAR YOU!

This image is for sale, email cyphlonatyahoodotcom

Category: Artwork
I realize I haven’t posted in a while. I have been on a long road adventure through the dessert and mountains. I do have new things posted. I am wanting to spread the word about the new activity going on with I KLATUS. I just put up some fresh sonic. Listen to the new song about MARDUK the malevolent planetoid of potentially earth shattering disaster!
New shadow plans enacted!
ADD www.myspace.com/iklatus
to find out more!

..
I had the distinct and rare opportunity to speak with one of my favorite researchers known only as FREEMAN from http://freemantv.com
The occult sorcerers that run the world exposed by his kabahlistic understandings and occult postulations
discussed here on my podcast ESOTERIC ORIGINS
egyptian evolution of the Vatican and their secret scientific pursuits code named L.U.C.I.F.E.R. Walt Disney working with Nazis in Nasa for an industrial military campaign to brainwash and indoctrinate americas youth into a life long mind control reality matrix of intolerable villany. Barrack Obama a Clone of ancient pharohs, Mayan Computers and Pyramid technology. Sacred mystic teachings masonic ritual and symbolism,cosmic rebirth,heart vibrations and syncronicity. Its all here in this stimulating one hour conversation with FREEMAN. Background music provided by CYPHLON www.myspace.com/cyphlon www.tomdenney.com
..
..
..
..

In honor of our own great moon completing another cycle this wednesday, I decided to create a sonic evocation. Cyphlon is a drone chrome robot working towards some sonic exaltation through mystic electronics and hi-tech alchemy.

Partly inspired by David Ickes new book entitled “Human Race get off your Knees” in which he makes the case that not only is our great moon held in an artificial orbit around earth but the moon itself is a sort of space ship carved deep into an ancient asteroid and driven here to Earth in the most distant of pasts. Just looking at our moons surface I see the scaring which has always looked to me like the battle damage of my old star wars toys. The moon is riddled with not craters, but massive mortar dents and remnants ancient attacks in some deep space warfare on a level that we are not use to imagining. It now stands guard, or perhaps stands as a grave stone to a forgotten race of advanced intergalactic warriors with its descendants suffering complete amnesia as to its true purpose. Zoom across the solar system to great SATURN and one of its 46 orbiting moons, the most curious MIMAS

Perhaps “THATS NO MOON” comes to mind along with the images of the DEATH STAR from the first Star Wars movie. Why build a death star when you can just carve some controls into an indestructible metal rock forged from the kiln of the universe itself and equip that leviathan with some weapons. Are we looking at something that has plowed through many eons of battles across time and space simply to reach its latest mission, PROTECT SATURN. There are many anomalies just within our own small solar system such as the MONOLITH on MARSIAN moon PHOBOS which Buzz Aldrin likes to talk about. Phobos itself did not even appear until suddenly in 1877, after Mars had already been studied by astronomers with telescopes for centuries. One look at a picture of the marsian moon will draw another curiosity important to this article.
BUT TONIGHT we focus on MIMAS with the new song by CYPHLON called “MIMAS”
deep deep within our night sky, queen Mimas has an unblinked eye. The one eyed lamb adrift in rings. Waits for sleepers to feel the beams. Heavy and hollow she balls the sky. Be there dragons on that great inside?

CYPHLON has more strange chrome drone for listens and downloads. Go there and see!
www.myspace.com/cyphlon

THE HIVE gallery with the 3rd Eye Gathering!

At the ROXY on the fabulous miracle mile in LOS ANGELES

Tony Koehl and I sharing an Easel.

For more pictures and info go to www.3EG.org

NEW ULTRA 2010 PACK!!!
Its the first thing for sale in the new decade!
This design of shirt has not been released before. I am also including a heavy DVD with a grip of rad videos and animations including interviews and bonus short film .
Check out more about theDOOMED MESSIAH DVD
So you get a silver ink SHIRT FREE I KLATUS CD
Also the DVD. Stickers, Postcards and 1 inch buttons!
just $25!!!

BANDS! Check out my new ART FOR SALE folder of images!